The marginalia of animal skins

The two calfskins, and one sheepskin, have been soaking in the lime solution for well over the one to two weeks recommended, so I have been fearing they might be spoiled.  Today we rinsed them and set about removing the hair.  The wool pulled away from the sheepskin easily.  The smaller black and white calfskin was very unevenly loosened; we returned it to soak with tufts still attached randomly across it.  The hair on the larger brown and white calfskin came away when briskly plucked. 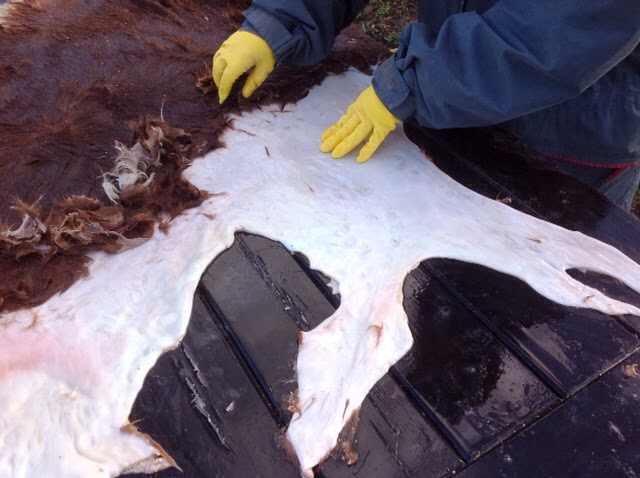 While pulling away handfuls of stinking hair from the very edges of the skin I got to thinking about the strange goings on in the margins of illuminated manuscripts, including the Cuerden Psalter.  Cynthia Johnston's wonderful talk about the Hart Collection manuscripts for the Friends of Blackburn Museum on Thursday had raised the question of 'why are these images there?'.  There are various theories on the subject, including those of Michael Camille, but as I scraped and plucked I started having my own. . . . . .

At the very edges of the animal skin one confronts nipples, 'pockets' (that held the testicles?) and orifices such as the anus, and tubes of skin where the legs once were.  The sanitized folio of vellum has these trimmed from its borders but the parchment makers were acutely aware of the life, death, and sexuality just beyond its margins.
Posted by Olivia Keith at 13:39